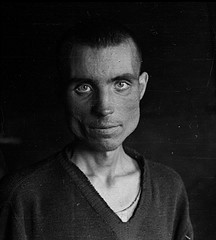 by Riksarkivet (National Archives of Norway)

‘Speaking Directly’ (1973-75), Jon Jost’s first feature film, draws together many of the elements explored in his short films, and can be seen as his opening statement to a wider public. It does not have the integrity of structure which his later work achieved, and looks like a collection of shorts, but the whole gains an extra quality which the shorts, because of their limited format, did not have.

The guiding theme behind the film is a self-portrait of Jost, his attempt to place himself, as a man and a film-maker, in his social and political context. In one section Jost literally gives us a self-portrait, a head and shoulders, while he introduces himself, speaking directly to the audience. Then the camera pulls back to reveal that the shot we are watching is being filmed by Jost himself, in a mirror. Jost is ‘reflecting upon himself’. We are also given a guided tour of his home, and introduced to his friends, each of whom is given a few minutes to speak about their relationship to him.

All of this is fascinating to watch, but what comes across most strongly is that this is an attack on established cinema conventions. All our expectations of a feature film are being ignored: there are no actors, plot, music, or setting. Instead the film-maker is introducing himself to us, and showing us some ordinary people saying ordinary things. The mood is distinctly revolutionary; all the usual barriers between film-maker and audience are being broken down in favour of direct communication on the subject of our real, everyday lives.

The film continues to break the rules, except the cardinal rule that the audience must be entertained, in every scene. There is a powerful montage sequence on Vietnam, in which three short sections of film are shown repeatedly, while on the sound-track we hear a Vietnamese woman’s firsthand account of a bomb raid, and statistics about the United States’ military involvement. In the third section of the film there are sequences designed to demonstrate the nature of film language, and the way it works on the audience.

At one point film Jost shows us all the equipment that was used in filming, and tells us how much it cost to make. He is de-mystifying and re-inventing cinema, taking it out of the hands of the capitalist exploiters and bringing it closer to the audience in every possible way.

One of the simplest, yet most effective scenes from the third section is an illustration of a prominent feature of all of Jost’s work: the long take. Jost says that he started using long takes because they both appealed to his tendency towards formal restraint and helped keep the cost of the film down, and that he continues to use them because he likes to give the viewer time to look for himself. He sees this partly as a political gesture, in that it gives the viewer, and the actors, more freedom of choice.

The use of long takes is also a deliberate attack on the standard practice in conventional film editing, which is to make frequent cuts in order to advance the story as quickly as possible. The attitude towards the viewer implicit in this practice, to hook him firmly into the story, alleviating him of the need to think, either about the film or beyond the film, is exactly what Jost is fighting against.

Some viewers object to long takes, and if the device is misused they have good reason, for they simply alienate us from the film and induce boredom. But when Jost uses them there is always good reason, and viewers who become bored or restless are, in a way, experiencing exactly the point he is making; they are resisting the challenge to think about the contents of the scene, and impatient for the film to carry on distracting them with a story.

A scene in ‘Speaking Directly’ takes this principle to its logical extreme: A stop-watch is placed before the camera, Jost announces: “End of take five minutes”, and that is it, nothing more happens for five minutes.

The viewer is thus thrown completely back upon himself. He might use the time to think about why Jost has done this, he might think about why he is sitting in a cinema, and what he expects from the screen in front of him, or he might simply become restless and impatient for the film to start again. The viewer has been forced into a confrontation with himself, something which rarely happens, either in the cinema or outside it.

When, via the stepping-stone of ‘Angel City’ Jost completed the transition from shorts to features, his themes and methods coalesced to produce works of subtlety and integrity which, while superficially more accessible than the shorts, carry the same power to fascinate, disturb, and deliver a political message. ‘Last Chants for a Slow Dance’, ‘Chameleon’, and ‘Slow Moves’ are as subversive and inventive as anything else Jost has done, but look more like normal films in that they employ the conventional ingredients of character and narrative continuity, and in that their message is embedded in the story, rather than presented directly.

Read the full version of this essay at: http://www.literature-study-online.com/essays/jon-jost.html

Ian Mackean runs the sites http://www.literature-study-online.com, which features a substantial collection of English Literature Resources and Essays, (and where his site on Short Story Writing can also be found), and http://www.Booksmadeintomovies.com. He is the editor of The Essentials of Literature in English post-1914, published by Hodder Arnold in 2005. When not writing about literature or short story writing he is a keen amateur photographer, and has made a site of his photography at http://www.photo-zen.com

This film – ‘Regen’ (‘Rain’) from 1929 by the Dutch film maker Joris Ivens – is a poetic meditation on the transformation of a city by rain. Mesmerisingly beautiful.
Video Rating: 5 / 5

Question by graysonwc: Making the best for an aspiring college film maker on a budget?
Hey all, I’m a young college film maker (more of a hobby really), but my budget isn’t very high. I could possibly invest in a better editing software like Final Cut Pro X, but as of now my only option is iMovie and a cheap video camera (I do have the iPhone 4S but that isn’t anything TOO special).

Anyway, I’m just looking for advice from fellow film makers on how to get the best for someone on a budget and would appreciate any suggestions. Thank you!