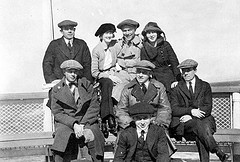 What do you get when you combine the popular Web 2.0 model of social networking (Facebook, Orkut, MySpace) with filmmaking? Social Filmmaking – The New Age Mashup.

A “Mashup” is defined by Wikipedia as, “A web application that combines data from more than one source into an integrated experience.” When it comes to Social Filmmaking, the two sources are namely: “Social Networking,” i.e. a collaboration of like-minded individuals on a Web 2.0 platform that encourages sharing of messages and media, and “Filmmaking”–the process of creating films for entertainment or education.

Social Filmmaking has found its unique definition already–defined as the process of building either a part of, or a complete film, through a group of people collaborating on a social networking website. The origins of Social Filmmaking can be traced back to the first Open Source movie project, which was launched in 2005. Although the project never gained visibility amongst a mainstream audience, it was lauded by industry experts who were amazed at the possibilities of using the Internet as a collaboration medium. Before this era, no one had dreamed that people collaborating on a website could ever make a film together. Although that dream is far from being realized even today, it is not very distant. With the power of the Internet, and particularly as like-minded, talented individuals begin to collaborate–working as remote teams from different parts of the globe–a skilled resource pool has emerged that knows what people want to see and is competent enough to deliver tiny bits and pieces of entertainment together.

As the Web 2.0 framework undergoes rapid changes in recent months, this new age mashup promises to trigger a new revolution in the entertainment industry. The question that remains to be answered is, “Is it possible to create an entire mainstream film through “social filmmaking”?” Well, according to Hinesh Jethwani, Founder & Head of Lets Film – http://www.LetsFilm.com – it is. “When millions of open source software developers can collaborate to create and support a complete Operating System (Linux) that has gained cult status in less than a decade, why should making a complete film in a similar collaboration be any different?” he says. “The only problem, is making producers believe in this model,” adds Hinesh.

Social Filmmaking is giving a unique chance to individuals to come and experience the science of filmmaking without having a pre-requisite qualification for the same. This next big revolution is waiting to explode. Would the next Steven Spielberg or Syd Field be you?

Answer by Rob J
They usually film any cursing with only the adult in the shot, and the kid not on the set. non- cursing sequences show them both.

We welcomed four-time Oscar-winning filmmakers Joel and Ethan Coen for a rare, career-spanning discussion of their work, moderated by Noah Baumbach.