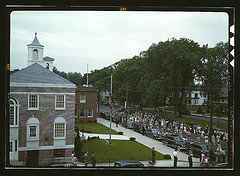 American Film Schools cost anywhere from $ 15,000 to $ 42,000 a year. When famous alum like George Lucas and Martin Scorsese went, the industry was very different, and their programs did not cost even a fraction of this amount. As a graduate of NYU Film, I learned the hard way of the gross disconnect between what is taught there, and how little it prepares a graduate for either working in the industry or making feature films. With tuition that astronomically high, I want to help dispel 3 of the biggest myths about film school that most people still believe in until they attend and graduate.

Myth #1: Film schools have clout in the industry. This is not Business School. Going to Harvard may get you a cushy job at Goldman Sachs. In the film industry, everybody works their way up from the bottom. Period. It does not matter if you went to NYU or USC. I recommend calling the Comar Agency. (I am unaffiliated with them). They are a staffing agency specializing in the Entertainment Industry. Call and ask them if a film degree makes you any better a candidate for a job than someone without that degree. And if not, then why not apply for a film job right now?

Myth #2: You need a film school to teach you how to make films. This weekend I checked out two movie shoots. One was a student film being shot at New York Film Academy. Here, each student is paying $ 30,000 a year in tuition to shoot on a $ 6,000 camera. Meanwhile, my friends Glynn and Frida shot their own 10 minute short by teaching themselves and spending time on film sets. They spent about $ 4,000 to get a quality HD camera, hire a professional gaffer, grip, and location manager, and actors. They did not pay any tuition. And the dailies look incredible.

Myth #3: You Need Film School for Networking. Here is how I met Glynn, the very talented film director I mentioned earlier. I was in a Coffee Bean in Studio City in Los Angeles. I saw he had a photo of James Cameron on his laptop. I turned to him and said “So you like James Cameron?” That was it. We talked for about 2 hours and had a blast, and once I visited him on set I met about 15 more awesome people working in or around the business. In LA, if you talk to people and are nice, you will make connections. You do not need to take out a student loan to pay for that. And if you do not live in LA, you can use the internet.

The book “Film School Secrets” will inspire you to skip school and start working on movies now. “Film School Secrets” is a hilarious class by class, dollar for dollar account of the NYU Film Curriculum, designed to illustrated in detail exactly where that $ 42,000 a year goes, so you know what you are really paying for if you go to any film school.

Top Film School Grads expose where all that tuition goes and why you don’t need it. Save thousands of dollars, start making movies now at http://www.filmschoolsecrets.com.

Written & Directed by AJ Carter. Winner of 10 international film awards, this stunning short film set in the rural wheat belt of Western Australia, provides a candid insight into the life of Ronan (David Lazarus), a 14 yr old boy who’s been bullied at school his whole life. This accurate & controversial portrayal of life for someone who has fallen victim to bullying and the repercussions which exist, is told by director AJ Carter in a unique, visually exposition intensive format with very little use of dialogue. Ronan’s Escape presents arbitrary scenes rather than traditional storytelling techniques which provokes audience discussion and individual interpretation of the scenes while reflecting on their own personal experiences. *Continue the experience: Official Ronan’s Escape DVD with special features, script, behind the scenes, photo gallery and more available at www.RonansEscape.com. An educational ‘censored’ DVD is also available for use in schools. Please visit www.RonansEscape.com and contact the producers for further information. Written & Directed by: AJ Carter [www.AJCarterFilms.com] [twitter.com/AJCarterFilms] Format: 35mm / Super16mm Filmed on location in Western Australia Produced by Smooth Motion Films [www.smoothmotionfilms.com]

Tredegar Comprehensive School and Gwent Police (Gwent is located in south-east Wales,UK) present a half hour drama entitled ‘COW’ –The film that will stop you from texting and driving,” with SPECIAL EFFECTS BY ZIPLINE CREATIVE www.ziplinecreative.co.uk (this is a trailer video) COW: Its all about Cassie COWan a nice girl from a Gwent valleys family who kills four people on the road because she used her mobile and lost her concentration for a few seconds. Gwent police is proud to have helped Brynmawr filmmaker Peter Watkins- Hughes in the production, which stars local drama students Jenny Davies as Cassie, and Amy Ingram and Laura Quantick as her friends, Emm and Jules. It is hoped this film will become part of the core schools programme across Wales and the UK and ultimately worldwide. Gwent Police facilitated the films crash scenes because we want to stop ALL drivers, but particularly young and new ones, from causing accidents. Over 300 teenagers from all over Wales were auditioned to take part in the film, nine police vehicles were involved and both the police and air ambulance helicopters featured. State of the art digital special effects were utilised to show the impact of what would happen inside the car during impact. Lyn Samuel, School Liaison Coordinator for Gwent Police said: We worked closely with the production team including the University of Wales Newport, Tredegar Comprehensive School and local partners including the council and Probation Service. The …

Question by gogo_oreo: What are some really good film schools in the United States?
I really wanted to go The European Film College in Denmark but it seems I can’t afford it. :/ So I was wondering if there are other good film schools or colleges in the U.S.?

Answer by Sam Spayed
The European film college is an 8 moth program and costs about $ 14,000 total.

NYU Tisch School of the Arts Film course is a four year program and costs about $ 45,000 per year.

Here’s a list of some good U.S. film schools. Note they are amongst the most competitive schools in the US.

The UC schools might be the most inexpensive, if you are a California resident.

FSU film moving forward despite Digital Domain bankruptcy
“[The Film School] is the only film school in the country with undergraduate and graduate programs that pay for the production costs of all of its student's films, thereby creating a level-playing field for students to focus on their art instead of on …
Read more on Florida Flambeau

**Original called: COW – The film designed to stop people txting and driving** **SMS schreiben am Steuer kann tötlich enden!!!** It’s all about Cassie COWan — a nice girl from a nice Gwent valleys family — who kills four people on the road because she used her mobile and lost her concentration for a few seconds. Gwent police is proud to have helped Brynmawr filmmaker Peter Watkins- Hughes in the production, which stars local drama students Jenny Davies as Cassie, and Amy Ingram and Laura Quantick as her friends, Emm and Jules. . The film is a sequel to a previous documentary called ‘Lucky Luke’, made 14 years ago, which showed the devastating consequences of joy riding. It is hoped the film will become part of the core schools programme across Wales and ultimately the UK. Along with our colleagues in the other emergency services, we facilitated the film’s crash scenes — because we want to stop ALL drivers, but particularly young and new ones, from causing accidents. Over 300 teenagers from all over Wales were auditioned to take part in the film, nine police vehicles were involved and both the police and air ambulance helicopters featured. State of the art digital special effects were utilised to show the impact of what would happen inside the car during impact. Lyn Samuel, School Liaison Coordinator for Gwent Police said: “We worked closely with the production team including the University of Wales Newport, Tredegar Comprehensive School and local partners including the …
Video Rating: 4 / 5

Oaks Christian Online School freshman, Andy Aragon, is involved in many acting projects that bring him joy. His recent part in an upcoming film, Space Warriors, shot at the U.S. Space and Rocket Center in Huntsville Alabama, allowed Andy to participate in the NASA Space Camp. The cast of this inspirational movie, set to launch in the spring of 2013, even got to witness the landing of the NASA rover Curiosity. Andy also has a lead part in the upcoming Nickelodeon cartoon series NFL Rush Zone. The new season will air right after Thanksgiving. Andy lived in LA while recording the series but did some of the episodes remotely in Texas. The project didn’t feel like work for him because recording in the studio is followed by hanging out with his friends in the cast. In the midst of all this work, Andy also finds time to do stand-up comedy with a group called Standing Tall Comedy conducted at the Improv Theater in Los Angeles, CA. A group of 20 students recently travelled to the Improv Theater in Las Vegas where they each prepared a 5 minute skit and performed on stage. I feel like, if I can do stand-up comedy, I can do anything.

Andy is finally able to enjoy his acting career and still attend a top tier, college preparatory high school. He says, Im not sure yet where I want to go to college, but when we found Oaks Christian Online School I didnt have to worry about school anymore. Andy currently spends 6 months in Los Angeles and then 6 months in Houston in order to be close to his dad and continue with his acting career. Both his work and school are flexible in time and place. Andys mom added, Not only does Oaks Christian Online School offer a very good curriculum and preparation for college, but it also offers a Christian education that we love for our kids.

The main campus of Oaks Christian School in Westlake Village, CA opened in the fall of 2000 and Oaks Christian Online School (OCO) opened for full-time, online students in the fall of 2011. The online school provides a rigorous and challenging college preparatory education for high school students all across the country in a Christian environment. Oaks Christian Online School continues to enroll part-time and full-time students throughout the school year and regularly hosts information sessions on its main campus 31749 La Tienda Drive, Westlake Village, CA 91362, as well as virtual information sessions for prospective student families. Interested students can visit the website http://online.oakschristian.org to R.S.V.P.