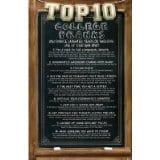 Choosing the best film schools to go to can be very difficult, there are a lot of things to consider before enrolling such as the schools location, tuition fee, budget, program and more. The following are the top two film schools from the Hollywood Reporter’s list.

The American Film Institute $ 38,416
AFI is one of the best film schools and the few most selective schools for film making in America. AFI’s Center for Advanced Film and Television Studies found in Los Angeles, California offers 2 year conservatory programs where in students can choose to specialize in different fields in film making which would including producing, writing and directing. Students often take classes in the institute following work experience in the film industry, and sometimes even after they have attended other film schools that did not work for them. Their students are usually older, experienced and mature, with average ages of 27, and can benefit form the many teachers and speakers who are picked form the top most of the film making industry, which are fully supported by the American Film Institute itself. Comparing the institute to its rivals such as USC and UCLA is sort of like comparing apples to oranges. The institute may have a small size and provide importance on field topics and specialization, but the AFI’s parade of successful and greater alumni, from Darren Aronofsky to David Lynch, remains unmatched when we talk about auteur filmmakers making it big. The institute’s students are assured the total freedom when making their thesis films. They are also provided access to the members of SAG to use for a cast and about $ 13,500 that the students can use for financing.

The University of Southern California
Another school considered to be one of the best film schools is the University of Southern California. USC is probably the wealthiest film school ion earth. Alumni for the school constantly donate for the welfare of the students there. USC most likely also has the most graduates that are actually working with the film industry compared to any other film school. The school also has the best support given from the movie industry itself. The school has more than 10,000 alumni, most of which are routinely donates millions of dollars. The donations are used to buy top quality, high tech, and up t date facilities, tools and machines that the students can use. George Lucas is one of the most famous alumni of USC. A really hard thing to learn and understand when it comes to film making is its culture. This mind set and idea cannot be taken from a book. By going to USC, you can understand this culture, says Elizabeth M. Daley, Dean of the film school at USC. The school has unrivaled facilities, and its programs give emphasis to film technique and history.

Choosing the best film school to go to can be very difficult, there are a lot of things to consider before enrolling such as the schools location, tuition fee, budget, program and more.

Choosing the best film school to go to can be very difficult, there are a lot of things to consider before enrolling such as the schools location, tuition fee, budget, program and more.

Two films enter, one film leaves in the showdown that is… TRS VS! It is time for another round of VS, as Alex, Dan, and Jeff compile their list of favorite films of all time by pitting film against film in winner take all competition. Be sure to check back next week for more daily RAD content!
Video Rating: 4 / 5

Question by Susana T: what are the top 10 film schools?

Outside of the US, only two institutions have been able to build similar reputations: the UK’s National Film and Television School (NFTS), and the Australian Film, Television, and Radio School (AFTRS). There are of course many other fine institutions in other countries too – they just haven’t managed to gain the same level of international reputation as these schools (yet).

Box office: '2016: Obama's America' lands in Top 10
"It's extremely rare for a documentary to break into the top-10, but August can be a land of opportunity for smaller films," said Paul Dergarabedian, box-office analyst for Hollywood.com. "Also, there's the fact that this is a very conservative film …
Read more on San Jose Mercury News

PLEASE READ! IMPORTANT! 🙂 May 25 2009 – Thanks to the cosplay group at AB ’09 for doing a wonderful tribute to this video at the masquerade! Everyone make sure to check it out in the video response! They did great. 🙂 Since YouTube’s conversion severely messed up the quality and makes it hard to see anything at all, let alone the text, please use the high quality trick by clicking this link here: www.youtube.com (As of right now, the link doesn’t seem to be working, so please just click “watch in high quality” below the video to see it in higher quality. ^^) You’ll be able to see it much better! Basically what you do is type “&fmt=6” (without the quotes) at the end of the YouTube address above and it plays the video back at a higher bitrate, making it higher quality (if it doesn’t work try “&fmt=18” but it generally doesn’t play back as smooth). 🙂 You’ll know you did it right if you see “Watch in normal quality” underneath the video. You can download an extra high quality version as well as view a detailed description about the video here: www.amv.org (Please do not re-post it on YouTube. I’d really appreciate it a lot if no one does that! ^^) At that link along with a high quality downloadable version and a detailed description, you will find information about the video itself, details on it’s two month creation, and also some fun facts while it was in the making. ^_^ —— **NO SPOILERS!** If you haven’t seen Ouran High School Host Club, you can watch this AMV with …

Box Office Top Ten: Anti-Obama Polemic Performs on Weak Weekend, 'Premium …
The top ten films grossed around $ 73 million, $ 3 million better than last year. The last weekend of August is usually deadly as the studios hold back from releasing top product and the summer hits are on their last legs. What is shocking is the low …
Read more on Indie Wire (blog) 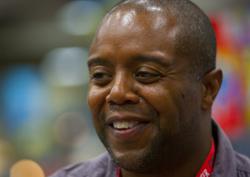 Neil Kendricks, adjunct faculty member in the NewSchool of Architecture and Design (NSAD) Digital Media Arts program, is curating the 10th season of alt.pictureshows. The popular short-film festival, founded by Kendricks as a graduate student at San Diego State University, will be held on Aug. 30, 710 p.m., at the Museum of Contemporary Art San Diego, 700 Prospect St., La Jolla, Calif.

In addition to preparing for the festival, Kendricks is teaching a photo class at NSAD. He is encouraging his students to attend alt.pictureshows to see how film storytelling techniques can be applied to class projects, which will include students developing their own short-film project using photo stills. One thing I want them to walk away with from the course Im teaching at NSAD is to understand how to communicate ideas through an image, whether that might be a photo or part of a video sequence, Kendricks said. You can have images that have lots of special effects, but that doesnt really tell you anything. My technique is to focus on the content.

As part of the class, students will be required to develop their own short film, or paper movie project, using photo stills. Kendricks got the idea from the late Chris Markers classic 1962 short film La Jet